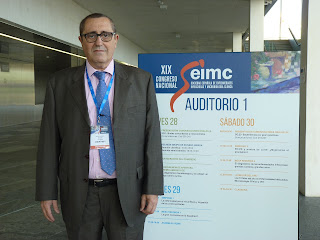 ESMO, the European Society for Medical Oncology, has announced today the publication of the ESMO Magnitude of Clinical Benefit Scale (ESMO-MCBS)(1), a tool to assist oncology clinicians in evaluating the most effective anti-cancer medicines for their patients.
“While it is known that the value of any new treatment is determined by the magnitude of its clinical benefit against its cost, to date there has not been a standard tool for grading such magnitude,” says Nathan Cherny, Director of the Cancer Pain and Palliative Medicine Service, Department of Medical Oncology, Shaare Zedek Medical Center, Israel, who formulated the idea some years ago.
The ESMO-MCBS offers a rational, structured and consistent approach to ‘stratify’ a drug’s clinically meaningful benefit.
A manuscript describing the project and reporting the main results from a field testing of the scale conducted on 77 cancer medicines across 10 cancer types was published today in Annals of Oncology(2).
The ESMO-MCBS project is being presented today at the American Society of Clinical Oncology (ASCO) annual meeting in Chicago in an ASCO/ESMO joint session on ‘Global Perspective on Value’(3), and will show how the Scale can provide useful information when used in conjunction with the preliminary results of the European snapshot perception survey on anti-cancer medicine availability conducted last year.
“As the international organisation committed to the interest of the oncology community at large, we are concerned about some anti-cancer medicines approved by the European Medicines Agency (EMA) not being available or affordable to patients when prescribed,” says Rolf A. Stahel, ESMO President. “With the ESMO-MCBS, we aim to signal the drugs with a large magnitude of clinical benefit which should be endorsed across Europe for rapid patient access, especially when these medicines are recommended through evidence-based standards set forth in the internationally recognised ESMO Clinical Practice Guidelines.”
ESMO intends to apply the scale prospectively to new anti-cancer drugs that will be approved by the EMA. Drugs obtaining the highest scores on the Scale will be highlighted in the ESMO Clinical Practice Guidelines, with the hope that they will be rapidly made available by health authorities across the European Union.
The ESMO-MCBS can be used in a range of settings, e.g. in public policy decision-making, to develop and/or improve clinical guidelines, in day-to-day clinical situations.
The ESMO-MCBS incorporates a structured, rational and valid approach to data interpretation and analysis that reduces the tendency to have judgments affected by bias, uninformed and/or idiosyncratic data interpretation.
“In the absence of a standardised approach for grading the magnitude of clinical benefit, conclusions and recommendations derived from studies are often hotly disputed and very modest incremental advances have often been presented, discussed and promoted as major advances or ‘breakthroughs’,” says Elisabeth G.E. de Vries, Department of Medical Oncology, University Medical Center Groningen, University of Groningen, The Netherlands, Co-Chair of the ESMO-MCBS Task Force. Challenges ahead for European clinical trials

The European Society for Medical Oncology (ESMO), in collaboration with the European Organisation for Research and Treatment of Cancer (EORTC),  expressed their views on the EU  Clinical Trials Regulation in an official position paper recently published in Annals of Oncology..
“The Clinical Trials Regulation (CTR) represents one of the most important changes in the field of clinical trials in the last decade, however it still contains unresolved issues that may prove to be challenging for research in Europe and for implementation by Member States,” says Prof. Christian Dittrich, Coordinator of the ESMO Faculty for Principles of Clinical Trials and Systemic Therapy.
Adopted by the EU institutions back in 2014, the new Regulation will come into force and become law across the 28 EU Member States in 2016.
Although still work in progress, the new EU CTR is definitely an opportunity to facilitate clinical cancer research in Europe and reduce some of the burdens that have proven so costly in the past.
For example, the CTR includes the concept of a one-time-consent for patient data and tissue to be used beyond the end and the scope of a clinical trial. This provides patients with the option to ‘donate’ their clinical trial data and empowers them to continue to contribute to medical research.
Other new items in the CTR include the creation of a single registration portal, a new category of studies (called ‘low intervention clinical trials’) and data transparency. These, combined with the more procedural items, will require additional efforts to ensure that they are correctly transposed at EU Member State level.
Gains made in the CTR in terms of usage of patient data and tissue through the provision of a 'one-time consent' needs to be consistent with the EU General Data Protection Regulation, which has yet to be voted on.
“It is vital that there is consistency between these two pieces of legislation,” says Paolo G. Casali, Chair of the ESMO Public Policy Committee.
“The Regulation is indeed an opportunity to improve and harmonise the way clinical trials and medical research are conducted across Europe,” continues Casali, “However to guarantee future success, it is essential that this important Regulation is evenly implemented across all European countries, as some stages of the regulatory pathway for new studies will fall within the national domain, for example ethical approval”.
With EORTC and the European Association for Cancer Research (EACR), ESMO has formed a European Clinical Cancer Research Forum. “Together with EU cooperative research groups we will monitor the implementation of the Clinical Trials Regulation and provide constructive input and feedback to all the relevant bodies responsible,” states Casali.
We hope that the EU institutions will listen to the voice of the cancer community and will be ready to address any potential discrepancies in the implementation of this Regulation across the EU 28, so that the much needed research in cancer can continue to improve the outcomes of patients in Europe and beyond,” says Casali.