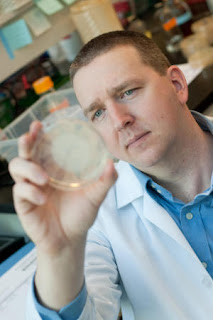 A University of British Columbia study has found traces of the bacteria listeria in ready-to-eat fish products sold in Metro Vancouver. UBC food microbiologist Kevin Allen tested a total of 40 ready-to-eat fish samples prior to their best before date. Purchased from seven large chain stores and 10 small retailers in Metro Vancouver, these products included lox, smoked tuna, candied salmon and fish jerky.
The findings -- published in a recent issue of the journal Food Microbiology -- show that listeria was present in 20 per cent of the ready-to-eat fish products. Of these, five per cent had the more virulent variety of listeria monocytogenes.
Allen says although the listeria monocytogenes levels in the ready-to-eat fish products met federal guidelines, the bacteria can multiply during handling and storage -- particularly toward the end of shelf life.
"Additional handling of ready-to-eat foods in stores, such as slicing, weighing, and packaging, may increase the potential for cross-contamination," says Allen. "While listeria bacteria can be killed by high heat, most people eat these fish products without further cooking."
He adds, "What this means for consumers is that pregnant women, the elderly and anyone with a compromised immune system should be aware of the health risks."
An assistant professor at the Faculty of Land and Food Systems (LFS), Allen led the study with co-authors Lili Mesak, a UBC research assistant, and Jovana Kovačevic, an LFS food science graduate student.
The researchers also tested ready-to-eat meat products from the same Metro Vancouver retailers where they bought the fish. However, they didn't find listeria in any of the 40 meat samples which included bologna, corned beef, cooked ham and pepperoni.
Eating foods spoiled with listeria monocytogenes that exceed federal guidelines of 100 listeria cells per gram can cause illness ranging from diarrhea to vomiting. Listeriosis infection can also result in brain and blood infections and is fatal in an estimated 20-40 per cent of cases.