Artificial pancreas could save lives during pregnancy 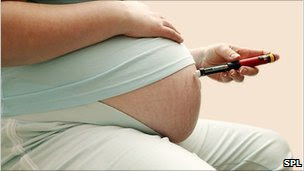 An artificial pancreas given to pregnant women with diabetes could save mothers' lives and improve the health of their babies, researchers say.
Hormonal changes during pregnancy coupled with diabetes make regulating sugar levels difficult, which can have damaging consequences.
The Diabetes Care research shows an artificial pancreas can keep sugar at normal levels.
Diabetes UK, which funded the work, said it could make pregnancy safer.Pregnancy worries
People with Type 1 diabetes are unable to control their blood sugar levels because their pancreas stops producing insulin.
It is a fatal condition which can be controlled by regular insulin injections, but that becomes much more complicated during pregnancy.
The safe range for blood sugar levels is much narrower then, and high or low levels which would be fine for an adult can damage a baby.
To discover an artificial pancreas can help maintain near-normal glucose levels in these women is very promising”End Quote Dr Helen Murphy Cambridge University
Dr Helen Murphy, from Cambridge University, told the BBC: "Half of all babies born to mothers with Type 1 diabetes are overweight or obese at birth because of too much sugar in the blood".
An earlier study of pregnant women in England, Wales and Northern Ireland showed the rate of stillbirths and deaths in the first week was four times greater in women with Type 1 diabetes, affecting 32 out of every 1,000 pregnancies.
Pregnancy can also be dangerous for the mother, who can end up with lower blood sugar levels and sometimes lose the warning signs for potentially fatal hypoglycaemic attacks.
During pregnancy, women with Type 1 diabetes spend 10 hours every day with sugar levels outside those recommended.Artificial Pancreas
Researchers at the Medical Research Laboratories in Cambridge fitted artificial pancreases to 10 women with the disease.
A sensor continually monitored sugar levels, which fed the information to a computer, which then told an insulin pump how much of the hormone to inject.
The early study showed that normal sugar levels could be maintained.
Dr Helen Murphy, from Cambridge University, said: "For women with Type 1 diabetes, self-management is particularly challenging during pregnancy due to physiological and hormonal changes.
"These high blood glucose levels increase the risk of congenital malformation, stillbirth, neonatal death, preterm delivery, macrosomia [oversized babies] and neonatal admission. So to discover an artificial pancreas can help maintain near-normal glucose levels in these women is very promising".
However she said it would probably require care before pregnancy to reduce the number of stillbirths and neonatal deaths.
Dr Iain Frame, director of research at Diabetes UK, said: "Although early days, this exciting area of research, funded by our donors, has huge potential to make pregnancy much safer for women with Type 1 diabetes, and their babies.
"We now need to see an extension of this study, one which tests larger numbers of women, and then take it out of the hospital and into the home."
The researchers say they have proved the concept works and hope to begin trials in the home later this year.